Free standard ground shipping is valid on orders of $99 or more, after promotions and discounts are applied, and that are shipped to a single U.S. address located in the contiguous 48 states. Orders shipped to Alaska, Hawaii, and U.S. Territories are not eligible for free shipping. Gift cards, shipping and handling charges, and taxes do not qualify toward the minimum purchase requirement. Eligible customers must select this option during checkout in order to receive free shipping. Offer subject to change without notice.

Get 10% Off your first order 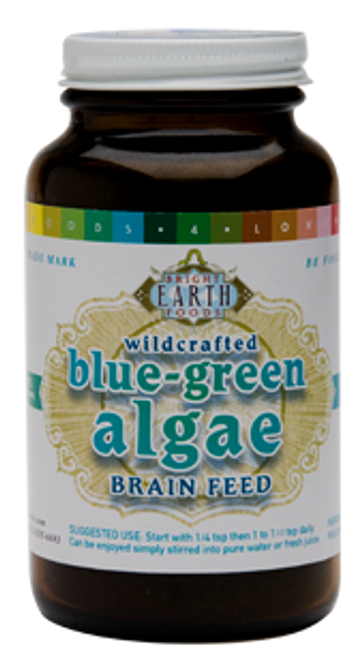 
Brain Feed is a highly concentrated form of micro algae designed to powerfully target the brain chemistry and modulate the immune system.

Brain Feed is a highly concentrated form of micro algae designed to powerfully target the brain chemistry and modulate the immune system. Our unique blue-green algae concentrate, Brain Feed, has been proven to have antioxidant, anti-inflammatory, and immune modulating properties. It has been shown to provide rapid improvement in cognitive function and visual acuity. This is a highly concentrated form of blue-green algae and is much more potent than the non-concentrated (Body Love). It takes 50 pounds of blue-green algae to make one pound of blue-green algae concentrate (Brain Feed). Brain Feed undergoes a sophisticated process which removes the outer cell wall of the algae and isolates the phycocyanin molecule inside to form a concentrate. This allows the inner nutrients to readily cross the blood-brain barrier. Brain Feed is different from our Body Love Algae in that it is without the cell wall which enables it to cross over the blood-brain barrier and nourish the brain directly.

It is unique because of it’s abundance of Phenylethylamine (PEA), which is known as the “love molecule” and is naturally produced in the brain in times of joy, love and feelings of bliss. PEA is a neuromodulator that promotes energy and elevates the mood. PEA is found to be deficient in people with clinical depression.  It is said to be the same chemical that is responsible for “runners high” and studies show it provides rapid improvement in cognitive function and visual acuity in vivo. It is over 60% protein by weight and contains the highest concentrations of vitamin B12 found anywhere in nature.

Studies show this superfood increases emotional positivity, mental clarity, cellular detoxification, concentration, attention span and overall feelings of well–being. It is one of the highest foods in overall chlorophyll content. Chlorophyll is what gives plants their green color and it is essential for healhty cellular replication. This is the oldest and most nutritionally complete food on the planet and is 100% digestible.

It is easily digestible because it is made up primarily of “soft” proteins which are immediately absorbed through the intestinal tract and go directly into the blood cells, making it one of the most utilizable protein sources in all of nature, containing over 60% vegetable protein and providing every essential amino acid. This makes blue green algae one of the cleanest and purest sources of plant based protein.

Algae contains a vast array of phytonutrients, antioxidants, minerals (especially iron, zinc, selenium, and magnesium) and is densely packed with vitamins, enzymes, and other unique compounds, making it one of the most potent superfoods available for human consumption. It is one of the worlds oldest and most comprehensive super foods in planetary history and has been the primary source of survival for cultures the world over.

Algae is also extremely high in minerals and has a higher concentration of beta-carotene than broccoli.  A rich source of calcium, iron, vitamin B12, enzymes and antioxidants make blue green algae an ideal food source for both adults and children. Even pets can benefit greatly from this nutrient-packed food. Although the natural sources where algae grows in the wild are being threatened, we are extremely grateful to have access to this pristine source of wild algae and to be able to offer it to you.

Blue-green algae mixes easily in water, protein shakes, superfood smoothies or fresh-squeezed juices, adding a naturally complete superfood boost. It is amazing sprinkled on popcorn and salads. For a double brain boost--add it to your raw chocolate, too. Try adding it to coconut water for refreshing and nourishing hydration and to boost your brain power.

Many of the compounds in algae serve as broad-spectrum antioxidants which help protect cells from damaging free radicals which are continually being produced in the body. Other compounds in algae function as strong immune modulators, which research has been shown to support immune surveillance. These compounds can activate aspects of the immune system involved in both the anti-bacterial and anti-viral immune defense mechanisms. The complex polysaccharides found in AFA are an example of these unique compounds. Research done on the polysaccharides in algae showed support of the activation of Natural Killer (NK) cells in laboratory tests. NK cells serve as a vital first defense against cancerous cells containing mutated DNA and infected cells.

Another incredibly valuable and important active compound found in AFA is phenylethylamine (PEA). Although it is found in other foods like chocolate, AFA supplies a much higher level and is actually the highest known natural source. Phenethylamine has gained significant notoriety in recent years as it is now thought to play an important role in depression and other psychiatric disorders. By measuring its metabolites, low levels of endogenous PEA have been documented in cases of attention deficient hyperactivity disorder (ADHD) and PEA supplementation has been used to treat clinical depression.

The Role of Algae in The Body

Complex polysaccharides present in wild blue-green algae contribute to the activation Natural Killer (NK) cells, the human body's primary immune defense mechanism. These cells travel in the blood stream in a state of rest, but can be immediately recruited into tissues by chemical signals which activate various mechanisms which kill virus-infected cells and cancer cells, b) divide and make more NK cells, and c) secrete substances that attract other cells to the infected area. Research on the polysaccharides in Algae provides strong support of activation of NK cells in laboratory tests.

Phenylethylamine, β-phenethylamine or phenethylamine (PEA) is well known as the “love” molecule as it is elevated in the brain during times of joy. PEA is an organic compound and a natural monoamine alkaloid, a trace amine, and also the name of a class of chemicals with many members well known for psychoactive drug and stimulant effects. Phenylethylamine functions as a neuromodulator or neurotransmitter in the mammalian central nervous system. It is biosynthesized from the amino acid phenylalanine by enzymatic decarboxylation. In addition to mammals, phenethylamine is found in other organisms and foods, such as algae and chocolate: the same compound that is believed to produce chocolate’s profound effects on mood. The phenylethylamine in chocolate is believed to work by making the brain release b-endorphin, an opioid peptide which is the driving force behind its pleasurable effects.

Exercise Found to Raise PEA Levels. From the book review Is ‘Runners’ High’ a Cure for Depression? by Daniel DeNoon, reviewed By Charlotte Grayson. “...phenylethylamine, or PEA, is a natural stimulant produced by the body. A British research team reports early findings suggesting that moderate exercise increases PEA levels for most people. They argue that this increase causes the euphoric mood often called “runners’ high.”

In a 1996 study, the effects of phenylethylamine (PEA) replacement were studied. It was found that PEA, an endogenous neuroamine, increased attention and activity in animals and has been shown to relieve depression in 60% of depressed patients. It has been proposed that PEA deficit may be the cause of a common form of depressive illness.

There is mounting evidence suggesting that their is a connection between low levels of PEA and depression and demonstrating PEA’s efficacy as an anti-depressant and it’s effectiveness with ADD (Attention Deficit Disorder). It is shown to be a present in higher levels during “runner’s high” and one of the chemicals responsible for romantic love. The PEA present in algae is part of the food itself and naturally occurs in combination with numerous co-factors and micronutrients.

Researchers at Rush University and the Center for Creative Development in Chicago conducted a study demonstrating PEA’s anti-depressant effects: “Phenylethylamine (PEA), an endogenous neuroamine, increases attention and activity in animals and has been shown to relieve depression in 60% of depressed patients. It has been proposed that PEA deficit may be the cause of a common form of depressive illness. Fourteen patients with major depressive episodes that responded to PEA treatment (10-60 mg orally per day were reexamined 20 to 50 weeks later. The antidepressant response had been maintained in 12 patients. Effective dosage did not change with time. There were no apparent side effects. PEA produces sustained relief of depression in a significant number of patients, including some unresponsive to the standard treatments.

Statements made on this website have not been evaluated by the U.S. Food and Drug Administration. These products are not intended to diagnose, treat, cure, or prevent any disease.